It was 4 years ago at the Biennial in Peterborough that Bill Love asked me to consider taking on the role of AOTS president. It was an unexpected request. I had left Toronto looking forward to enjoying a weekend of fellowship and spiritual renewal as a member of AOTS and as president of the Toronto Conference of the organization. I was taken aback by the request. I was preparing to take my leave from my position as communications manager at Statistics Canada and had scheduled my retirement for July of 2008. I was looking forward to starting a consulting practice and hadn’t planned on any more volunteer work.


A decision like that isn’t taken without consultation with one’s life partner and I told Bill that I had to consult with my wife. I did and she gave me her blessing and I ended up saying yes. So began my journey – two years as president–elect followed by two years as president. I have not regretted the decision. The burden has been light and the rewards manifold. 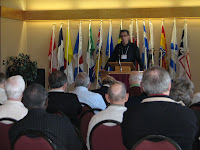 This organization is one to treasure. It has a rich history of service and dedication to Christian principles. I have been blessed with the opportunity to uphold both that tradition and honour those principles – in a time of great change in our world, our country, our society, our church and our families. Several years ago I did a workshop here at Jacksons Point – one in which we asked attendees to discuss their understanding of God and if and how God had changed for them in their eyes over the years. For most men God had changed. One man even said the that he concluded that God was a women – seeing as all the bad things men had done in the world like war etc. It was a brave comment and it got a lot of laughs. AOTS has been that forum for me. It has been a place of spiritual renewal – a place of searching for meaning – of openness and inclusivity – where we examine and discuss what spirituality means for us in community, in church, in society in politics and in family.

We have examined those issues here; of what is family and what is kinship – who is the “other” especially when we know that the message of Jesus is that every child is a child of God. So the opportunity of having these discussions, of having these spiritual insights provided by so many wonderful speakers at these rallies, roundups and conventions is why I will never say that I gave to AOTS – no AOTS gave to me. I got more that I gave – I was uplifted by this organization – by its dedication to service and therefore to the inclusive message of Jesus. There are so many to thank. I will name only a few now. My apoloigies to thoise I do n ot mention. My gratitude extends to all AOTSers. Many of those who helped me, who gave to me more that I could give to them are here in this room with me know. People like my immediate past president, Bill Love – and absent is his brother in arms Wally Shoults, with whom I disagreed about the tar sands; although in fairness he would call it the oil sands. And others like our faithful servant, Jim Upright, who held up the entire western end of the country and vice president Gary Ross organizing tours of Newfoundland or Ed Macdonald making sure links with other men's groups were strong in Central Canada or Harvey Douglas who was such a stalwart of giving and service in Western Canada and who carried so much of the Dondi project on his back. It is surprising what one man can do. And he so often keeps us sharp with his email messages.

Or Garnet our past, past president - Sometimes I don’t know what he’s saying but I do know it’s full of love. I am going to give you a kiss later on. Or Al Anthony and Jim Waterfall who are just there – who do the work – organize the events and provide the backbone and spine to club, conference and national initiatives. Or John Cooke who so marvellously took everything good in this organization and carefully remoulded our constitution and bylaws devoting countless hours of work and research. Or Howard Will and Wally MacDonald who are here tonight I am delighted to say sojourning with us one more time and who so actively served us so well, carrying our banner. And Ernie Orpin the wise one who knows where the money is and is buried and who so carefully managed the books for so long. I have learned from you all. And Marvin who does his own work – managing our books controlling the finances and doing such a great job with all of that, as we embrace the internet, website and email age. He makes it looks easy it isn’t. I know I was a treasure once upon a time. I didn’t do so well at it. And Ken Lane who puts together programs and knows the history like no one else and has been there. And is ready to change with the times so long as the course is set to the message of Jesus. It is. And Ray Cockburn my colleague in Toronto Conference who dutifully takes minutes and makes them correspond to reality with whom I have worked for so many years on conference programs. And Harold Lorenz – in my mind’s eye I call him the horse. It is a moniker of respect. Perhaps one of the strongest men I have ever met. I recall him organizing work parties to climb roofs at Lake Scugog. He has managed finances for years for Toronto Conference and at Roundups. He does so many things including acting as our great Handshake editor. And Keeling Little, the registrar/organizer who puts these programs together with such a careful eye for detail and such great respect for the allocation of our budget. And Mark Browning our fresh faced and website manager who is alive with new ideas and the enthusiasm we need to sustain this organization through the changes in front of us and the challenges ahead. And our incoming president who I turn the reins over to this evening, whose steady outlook and patient wisdom will guide us over the next two years. We are in good hands with Dave Morris. And George Bishop who has so often been my voice of reason – the one who has the ability to sit back and see the big picture and the one whose social conscience burns so brightly. He has not been one to trade his capacity to think for the security of being told. I have learned much from him. And Harry Wolfraim who has been my mentor for so many years. Not because he told me to listen to him because he had something to say as I would have done. But simply because he did what had to be done so many times, in so many ways and with such unbridled enthusiasm for the spirit of service that AOTS, the United Church and the message of Jesus represents. I am in debt to you all. It has been your gift to me to bestow upon me the honour of being your leader. Thanks be to God.