The DONDI project – it’s what friends do

Q: HOW to change the lives of children in Angola, connect with UCC people all across Canada, have a lot of fun and support the Mission and Service Fund – all in one day?

NO , you don’t have to drum til your hands fall off. The idea is to just keep the beat going – it’s a team effort – all across Canada.

YES , let’s help our longstanding church partners in Angola rebuild the school (destroyed by civil war) where UCC Missionaries have taught for decades. To help us keep this friendship thriving find a Drumathon location near you – or plan to host one yourselves. 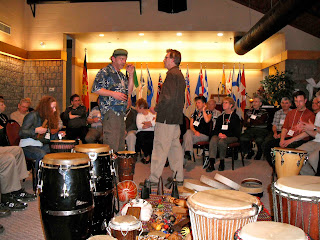 Many of you are aware that I issued a personal statement about the G8/20 events on the evening of the summit weekend. I am happy to supply that statement to anyone who would like it. Given that it could be interpreted as a partisan political statement, I issued it personally, and not as president of AOTS. And it will not be posted on the AOTS website.


Last month’s monthly report was a sermon I delivered at Northminster United the week before the summit.

However, political news continues to shape our world and demand our comment. But rather than be politically partisan it is sometimes useful just to examine the facts. And that is my purpose in this month’s missive. Like Joe Friday of Dragnet fame I am just going to stick to the facts.

And the fact of the matter is that there has been a lot going on our political world over the last month: G8/20, the Census, a once-again crisis ridden RCMP, troubling and terrible news of the war in Afghanistan.

As with last month’s report I welcome comments and feedback to this article. The discussion is important.

Fact number one is that our politicians haven’t been sitting down to talk about all this. Our Federal parliament has met a total 65 days this year and isn’t scheduled to resume until September 20. Instead we have a mentality that suggests Parliament isn’t necessary, that it can be pro-rogued, dispensed with and ignored. Why pay attention to it, when everything can be handled by executive decision or decree and the public informed or misinformed about it surreptitiously? I don’t think I am being harsh.

Take the very weekend of the G8/20 meetings in Toronto as a case in point.

Mis-leadership at the Provincial Level (Ontario)

Many are suggesting that the troubles at the G8/20 meetings and protest were manufactured by security services to reassure the Canadian public that the $1.2 billion expenditure for security was well spent.

“There is a real temptation to think that an issue is less spiritual for being more political, to believe that religion is above politics, that the sanctuary is too sacred a place for the grit and grime of political battle. But if you believe that religion is above politics, you are, in actuality, for the status quo – a very political position. And were God, the god of the status quo, then the church would have no prophetic role, serving the state mainly as a kind of ambulance service.” William Sloane Coffin

With $500 million of that allocation going to our troubled RCMP where there is a crisis of leadership, it is easy to see why many people are raising the inquiry sign.

The facts are that of the 1100 people arrested “charges” have been already been dropped against 850+. In fact, most weren’t even formally charged. They were simply arbitrarily arrested, detained and jailed, often treated poorly by police services and subsequently released.

Yet it was on the Saturday of that very busy weekend that Prime Minister Harper’s government, which was itself in charge of all aspects of security at the summit, quietly announced massive changes to the Canadian Census – and like his counterpart in Ontario, without consultation or public discussion.

Now this is an old government trick - release something at 4:30 pm on a Friday in the hopes that the media will miss it or ignore it.

But this was not just a release (actually an order in council along with a host of other orders) to fundamentally change the Canadian Census rendering it an unusable tool in measuring Canadian demographics. Now it is just not me that is saying that.

In a report complied independently there were over 160 organizations against the government move including the United Church of Canada and only three individuals of groups in support of it. (See below.)

It is also the case the 2011 long form census included a question on religion. The religion question is asked every 10 years and many organizations look forward to what the census story will tell us about who we are, how we are and what role God plays in our lives.

“To sin by silence when they should protest, makes cowards of human beings.” Abraham Lincoln

On July 22, 2010 our church made the following statement on the Census issue:

“Toronto: The United Church of Canada has added its voice to those protesting the government’s recent decision to eliminate the mandatory long-form census. In a letter this week to Industry Minister Tony Clement, the church urged the government not to implement a voluntary system of collecting detailed census information.

“We see this as a step backward at a time when Canadians need access to reliable census information to help build a more equitable and just society,” says the Rev. Bruce Gregersen, General Council Officer, Programs.

He adds that because the long-form census also contains questions related to religion, it would be a great loss to faith communities and to the country in understanding the multiplicity and richness of the spiritual makeup of Canada.

Gregersen says like other non-profit organizations and charities, the United Church benefits from the wealth of data that is collected and analyzed by Statistics Canada.

He explains that many local United Church congregations, particularly those facing significant demographic change, use census information to help identify community needs within the neighbourhoods they serve.

“Knowing who your neighbours are is an important part of adapting congregational outreach programs and advocacy initiatives that are integral to the church’s mission,” says Gregersen.

“Responding to community needs, both spiritual and social, is how the United Church, its congregations, and its members live out our faith in this world,” says Gregersen. “Losing the statistical tool that helps to identify these needs will seriously handicap our ability to respond as effectively in the future.”

In closing I will quote a recent editorial from the National Post – hardly a left-lib think tank. Here is their response to the Census issue.

We are on record opposing the government's slapdash approach to cancelling the mandatory long-form census. Nothing has occurred in the two weeks since to change that opinion or to alter the impression that this was a hasty decision, and that the dubious explanations now being offered for it were concocted after the fact.

Still, no matter how stringent Statistics Canada's privacy safeguards might be, we understand some Canadians' visceral discomfort with the federal government asking intimate questions about their lives--on pain, however theoretical, of imprisonment. And we also understand the protestations of those outside the nation's capital that this has been blown out of proportion. It's almost certainly true that if it weren't July and political journalists weren't starved for topics, we wouldn't still be talking about this.

But it's making the government look foolish, and it doesn't appear that anything more salacious will come down the pipe to distract the chattering classes' attention before autumn. For this self-interested reason--and also, for the more important and substantial reason that good census data is a valuable resource -- the government should accept a compromise solution offered by the National Statistics Council: Remove certain long-form questions that are deemed particularly invasive and eliminate the threat of imprisonment from the relevant legislation.

Organizations & Individuals AGAINST the Government Decision

8. Association of Educational Researchers of Ontario

9. Association of Municipalities of Ontario

26. Canadian Conference of the Arts

51. Centre for Study of Living Standards

66. Conference Board of Canada

107. National Statistical Council ( acts in a consultative capacity for StatsCan)

119. Prentice Institute at University of Lethbridge

140. SPARC BC (Social Planning and ResearchCouncil of BC)

148. Toronto Board of Trade

155. United Way of Kitchener-Waterloo and Area

The religion question is asked every ten years and was scheduled to be asked on the long form census in 2011. There are only a few days
No comments: