FAITH, DROP-FORGED
It seems as if the church today is in a fitful freefall. Through several engaging workshops that draw on story and music, Rev. Ted will challenge us to identify ways in which our faith is being refined and re-defined. We may yet discover that the church's freefall is a kind of drop-forging, into which God is inviting us to step with fear and with faith. Expect to laugh, expect to sing, expect to be challenged.

Ted Harrison was ordained in the year 2000, when he began serving churches in northern Ontario. He's since earned his Doctor of Ministry degree. He's a part of the ministry team at Trinity United Church in North Bay. Ted is deeply involved with Manitou Conference, serving as its President from 2011 through 2013. Ted has real passion for Christian worship, with a focus on relevant and dynamic preaching that draws on scripture, humour, and music. Ted is also a trained spiritual director. Ted reads a lot. He loves jogging, canoeing, cross-country skiing, and he plays cowbell in a rock band (No, really!). Unfortunately, Ted always misses meeting the varied superheroes who have led late-October worship services at Trinity. Ted has two daughters, Eve and Erin, who he thinks are exceptionally brilliant children! Ted is married to Caroline, who is a hospital physiotherapist and a part-time sermon critic. 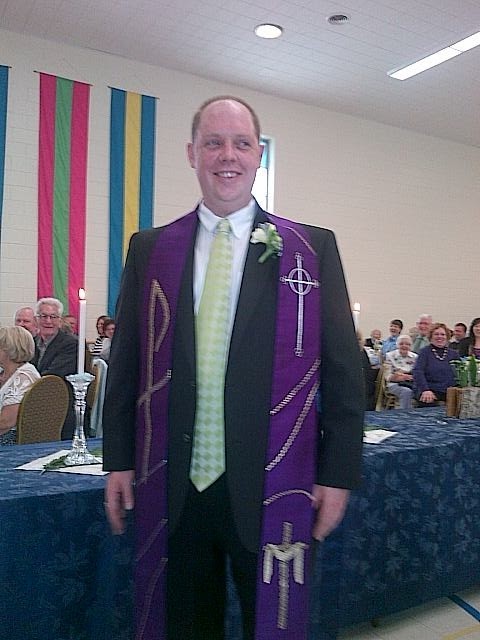 Rev Ted Grady lives with Zaccheus who keeps him busy and offers wonderful companionship in his ministry. Zaccheus is a golden retriever pup.

Ted grew up in Islington United Church, where he worked for almost 17 years as a weekend Sexton and 9 of those years as building manager. He was ordained in May 2012 and answered a call to Knox United Church in Sutton.

He continues to pursue his passion for music playing bass guitar in a band he has been a part of for 22 years.