In the courtyard at St. Paul’s United Church, Oakville Ontario
Drop in anytime between 2 and 4 pm on Saturday, July 17

People from St. Paul’s will join in celebrating Howard’s milestone with other friends and acquaintences, such as The Salvation Army, Hiker’s (Anonmyous) and other long-term friends.

For those who don’t know, Howard is now in residence at Trafalgar Lodge, where he is receiving expert care and attention for his condition and well-being. 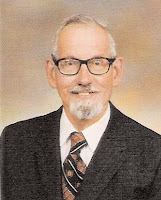 Howard’s actual birthday was on Wednesday, July 7 but we selected July 17th. as a great day to celebrate with him.

Visitors will be served birthday cake and ice cream along with favourite beverages such as Tea, Coffee and soft drinks.

We ask that you contribute the sum of $3 towards the cost of this reception.

In case of inclement weather, reception will be held in either Watt Hall or the small auditorium organized by St. Paul’s AOTS Men’s Club in association with Howard’s hiking associates...

Signs of the Times - President's Message for July

Signs of times are all around these days as we commemorate and celebrate the 85 years of our church’s existence. We know change is at hand. As we age we are faced with questions of aging. What will we make our congregations become? What is god calling us to do? How do we do it?

There seems to be so much calling for our attention. So much in the world is askew. Maybe we just have more information now and that’s a good thing. But there is so much bad news that one is tempted to cancel subscriptions to newspapers.

These are signs of the times. There are many. Just this week we have before us so many clear examples of how poorly people do when god is not in the picture. When God is silent. It is like this morning’s Psalm and the prophetic words written before Jesus is said to have uttered such similar words, Dear God “Why have you forgotten me?”

This despair of Jesus as he lay dying on the cross. This spiritual depression. We see it in the absence of god and the prevalence of all that god is not.

We see it. We see it this week when a report comes down on the 25th anniversary of the Air India bombing – report which seems to shriek that god is not there, that god is silent that justice is absent.

We see it as we as examine the legacy of security organizations who put their internal disputes and turf wars ahead of the security of the Canadian people.

We see it in a report that states that the non-action of these agencies was a contributing factor in the bombers being able to carry out their evil act. And we see as the commission reports that those turf wars continue to this day.

We see it in quotes from those whose families died on that day.

“One of the biggest memories was Prime Minister Mulroney calling the Indian prime minister to give his condolences when the people on the plane were Canadians. It made me feel small, not important, even though I always felt Canadian.”

And the lesson says there is neither Jew nor Greek.

As Christians we pray for both perpetrator and victim – victim and victimizer - we pray that they may know God and come to terms with a path god would have them lead. We pray for forgiveness and for reconciliation. But as Christians we do not stop at prayer – it is our nature to seek god in community – and in community we seek justice for all of god’s children - we protest iniquity, we protest deception, and lying, and cover-up, we protest corruption and inaction in the face of dire consequences. As Christians we call for change, we stand for change we enact change. We call for a consideration of what God would have us do.

Recovery for whom one might ask?.... in light of the Johnny- come-lately invitations to the some of the poorer countries of the world.

Our minds and psyches are not just on G8 this week but rather on father’s days – where we honour the icon of fatherhood – good and bad.

For we know that for some fathers the challenge of simply being there was too much. It was more than they could do.

And sometimes we are reminded that what fathers do is far from what God would have us do. We are reminded of that this week when we see some of the bad played out before us as a domineering father and brother are sentenced to life in prison for their insistence upon patriarchy. For their right to their misogyny. For their right to suggest that honouring the father means killing the daughter.

We see it. We see it this week with the apology of the British prime minister to families of those shot dead in the Sunday Bloody Sunday massacre, some 38 years after the event - after an inquiry had determined that the 14 protesters shot dead by police often in the back, were innocent of any wrong doing, and further that the reckless attacks by the security forces were both unjustified and unjustifiable.

We see it now with the continuing saga of the Gulf Oil disaster from the very voices who clamoured for deregulation and less government who now scream the the loudest in saying where is government and why didn’t it save us. These purveyors of blame drown out the voice of god.

We see it in an attack on an aid flotilla attack in international waters – where there is till Jew and Greek, where the lesson of Paul’s letter to the Galatians is still not being lived out.

We see it in the cacophony regarding protesting at the G8 summit. As we are reminded that the protesters in Derry did no wrong. They were innocent.

And we witness the issuing of travel advisories, the shutting down of a city and preparations for violence against those who would who would protest the inaction and ineptitude of world leaders who too often put profit before people.

Knowing that god calls us to both prayer and protest.

We protest a Gulf Oil regional safety plan that was so grotesque in its slipshod construction and its one size fits all approach as though it was mimeographed and passed from one oil company to another. Its inadequacy in the regional Gulf plan highlighted by the provisions for the safety of non-existent walruses in the Gulf of Mexico.

We see it as yet another senior security boss leaving Canada’s troubled $50 million dam project in Kandahar after Canada lost control of the project which is rife with allegations that Afghan partners are colluding with the insurgents in order to maximize profits from lucrative contracts to protect NATO supply convoys jeopardizing the safety and well being of Canadian soldiers charged with safeguarding those supply lines.

We see it. We see it on First Nations Sunday, where this week an historic truth and reconciliation commission began it proceedings. And we remember that good intentions are not good enough. As we hear the stories of the experience of Aboriginal People in residential schools, we learn that they are no longer “our” Aboriginal people; on the contrary we open our eyes to the value of a spirituality we have ignored and denigrated. And we are thankful to god for the opportunity to do so.

And the scripture reminds us of those who ask “Where is your god?” It is there.

In despair that is as deep as Jesus’, we ask what can we do? And as Jesus did we can befriend the man at the tombs. The man from the tombs who wore no clothes.

And on fathers’ day we can recognize that fathers and men are more than the patriarchy has limited them.

We need only look around and see them. People like James Bartlemen who stood up to those in the security services who would have covered up the glaring mistakes and human devastation caused by our security agencies squabbling in the Air India disaster. And we recognize that there were those who attacked him in an attempt to discredit him. We celebrate his exoneration.

We remember men like Bishop Tutu and Nelson Mandela especially this week as South Africa shines on the international stage with the organization of the world cup. Their journey has been long but full of justice. God is present.

Let us not fear to stand-up, to protest. Let us remember that making sure that God is present is often a matter of simply being there ourselves.

Preston Manning wrote an excellent fathers’ day piece for this weekend’s globe and mail writing about behaviours he learned from his father:

He said politicians are subject to enormous amounts of abuse and criticism. And each develops our own mechanisms for handling it. Some choose to fight back blow for bow. Others resolve never to let them get us on an emotional level and gradually develop and hard outer shell that eventually become almost impervious to provocation.

It is a useful strategy except for one dangerous aspect: That shell can render us impervious to emotional messages and appeals of any kind including those emanating from friends, family, wives and children. He quotes Richard Rohr, a Franciscan priest and spiritual mentor who has written extensively on father-son relations. Commenting on the difficulty that most men have in shedding tears says, “I suspect non-weeping is the price that male pays for so many years of going to war. You have to split, deny and repress your feeling world to survive such ordeals. In effect we've chosen a survival of cultural and national pretences over the survival of the male soul.

Yes men have been bred like dogs to be so, overdeveloping some qualities of detachment and stoicism and repressing others like feeling, empathy and vulnerability.

This father’s day let us remember that. Those good things that have been passed on to us by our fathers. But if that heritage deliberately or inadvertently has rendered us insensitive to the emotional; needs of mothers, including our own loved ones let us acknowledge that also and leave it behind.

Let us pray for both the victim and the victimizer never forgetting that aside from prayer we are called upon by god to protest the crimes of the victimizers and not just pray about them.

This despair of Jesus – this spiritual depression is resolved, is cured through faith in God and action in the world doing what god would have us do.

Like the story of the man at the tombs. We don’t have to believe the story to know it to be true.

There is hope in God. And out of hope a path forward. We need only walk it.

Thanks be to god.
No comments: